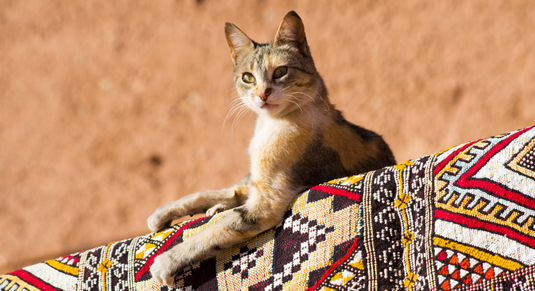 A new study shows that modern domestic cats are ultimately derived from the African wildcat, which was domesticated in two centers – Egypt and the Middle East. Moreover, both lineages contributed to the genomes of European cats.

MUNICH, 26-Jun-2017 — /EuropaWire/ — With a little help from friends, the cat has conquered the most remote parts of the world. Archaeological evidence suggests that cats had already established a close association with human societies almost 10,000 years ago. Nevertheless, relatively little is known about the history of their domestication. Genetic analyses carried out by an international team of researchers now show that lineages which originated in Egypt and the Near East were ancestral to our modern domestic cats. Professor Joris Peters, Chair of Paleoanatomy, Domestication Research and the History of Veterinary Medicine at LMU, played a major role in the investigation: Much of the material used in the study originated from the Bavarian State Collections for Anthropology and Paleoanatomy, of which he is the current Director.

Genetic analyses of modern housecats have already shown that all were derived from the African wildcat, Felis silvestris lybica. F. s. lybica is one of the five recognized subspecies of wildcats, and is found in North Africa and Southwestern Asia. “In order to shed further light on the cat’s domestication history, we have now performed a comparative analysis of ancient cat DNA isolated from remains recovered in archaeological excavations and from material stored in museum collections,” says Peters. “The samples we investigated come from Europe, Africa and Southwestern Asia and included Egyptian mummies. They allow us to journey back in time to the beginning of the close relationship between cats and humans, which was established as a consequence of the development of sedentary agricultural communities cultivating cereals.“ The oldest sample examined dates from about 9000 years ago, the youngest from the 19th century.

To trace the process of cat domestication and dispersal, the study focused on mitochondrial DNA. Mitochondria are responsible for energy production in all animal cells and are maternally inherited. The analyses revealed that, in the Neolithic period prior to the establishment of agriculture, the African wildcat’s natural range was far larger than hitherto assumed. In fact, it extended into Southeastern Europe, where F. s. lybica came into contact with the European wildcat, Felis silvestris silvestris. The mitochondrial DNA lineage brought to Europe by F. s. lybica had arrived by about the year 4400 BCE, and it represents Southwestern Asia’s contribution to the evolutionary transformation of the African wildcat into today’s familiar housecat.

The dispersal of the domesticated Egyptian lineage onto the European continent, on the other hand, likely occurred in Antiquity and proceeded along the Mediterranean maritime trade routes pioneered by the Greeks and the Romans. “Most probably, sailors took many of these cats on board their ships to keep rats and mice in check,” says Peters. “In fact we were able to identify one lineage that must have reached Northern Germany during the Viking Age.”

On arrival in Europe, the immigrants intermixed with the local subspecies of wildcat, giving rise to a variety of hybrid lineages. Many of these episodes of hybridization can be approximately dated. One mutation in the nuclear DNA results in a coat-color pattern known as tabby blotched (which is quite distinct from the ‘mackerel’ pattern characteristic of wildcats), and this gene variant is very common among contemporary European housecats. However, the new study shows that the mutation was actively selected only in the Middle Ages, long after the arrival of the first domesticated cats on the continent. Based on this finding, the authors suggest that the initial domestication process may have focused on selection for behavioral traits rather than on coat color or marking patterns. (Nature Ecology & Evolution 2017)

The study of human activity through the recovery and analysis of material culture. Archaeologists study human prehistory and history, from the development of the first stone tools at Lomekwi in East Africa 3.3 million years ago up until recent decades.

Adaptation to malaria in hunter-gatherers 7000 years ago