There is a fair amount of archaeological evidence that indicates complex behaviour among our ancestors. For instance, there are bone tools that were used as hunting projectiles, for working leather or for processing plants. Ochre remnants were used for body and rock painting. But plants and their products have rarely been reported to embody this type of complex behaviour.

Now a multidisciplinary, international team of archaeologists has presented evidence that more than 200,000 years ago, at the dawn of our species (Homo sapiens sapiens) groups of humans inhabiting a cave in South Africa used grasses to create comfortable areas for sleeping and working. They also, our research suggests, understood the benefits of using ash underneath the grass to repel insects and pests.

Before this there was tentative evidence of bedding being constructed using tree leaves some 185,000 years ago at Misliya Cave in Israel. Groups of Neanderthals from the Iberian Middle Paleolithic also used grasses to build their beds and rest areas about 40,000 years ago at Esquilleu Cave (Cantabria, Spain). In South Africa, plant bedding has been observed at several sites but never studied or published in detail. Until now, the oldest bedding in South Africa came from Sibudu Cave in the KwaZulu-Natal province, where modern humans used sedges (Cyperaceae) to build sleeping beds about 70,000 years ago.

Our research, led by Professor Lyn Wadley of the University of the Witwatersrand in Johannesburg, now shows that before 200,000 years ago – close to the origin of our species – people preferred the use of broad-leaved grasses to build their beds and resting areas. They also used fire, ash, and medicinal plants to maintain clean, pest-free camps.

The construction of this bedding itself comes as no surprise: many animals such as chimpanzees or birds construct their beds and nests with plants. At our study site, it is the presence of ash layers underneath the bedding that demonstrates a more elaborate behaviour.

These findings are important because they show that our ancestors were able to organise the space and the capacity of these early societies to develop strategies that would have had health benefits, improving their daily living conditions. This helps us to understand them better, and to develop our understanding of where we’ve come from in terms of cognition and spatial awareness.

Plants, people and the archaeological record

Plants are the most common resource exploited by hunter-gatherers. They provide a source of food and water, beverages, medicines, poison and firewood, tools for hunting, fishing, storage and transport of food and goods, shelter and protection. Plants can also be used for numerous other purposes related to social beliefs and rituals, such as making ornaments from seeds; to make musical instruments; statuary and other decorative and symbolic objects.

There is little archaeological data on the types of plants and the different uses that were given to them by hunter-gatherer populations during prehistory. Globally, this is probably related to bad preservation of plant remains in the archaeological record. In South Africa, interest in studying botanical remains peaked in the late 1980s and early 1990s; few archaeobotanical studies have been conducted since then. There is a need for a better understanding of prehistoric plant use in South Africa.

Our research was conducted in Border Cave, located on a cliff between eSwatini and KwaZulu-Natal in South Africa. It is a Middle Stone Age site that preserves human occupation dating from between 38,000 years and about 250,000 years ago. 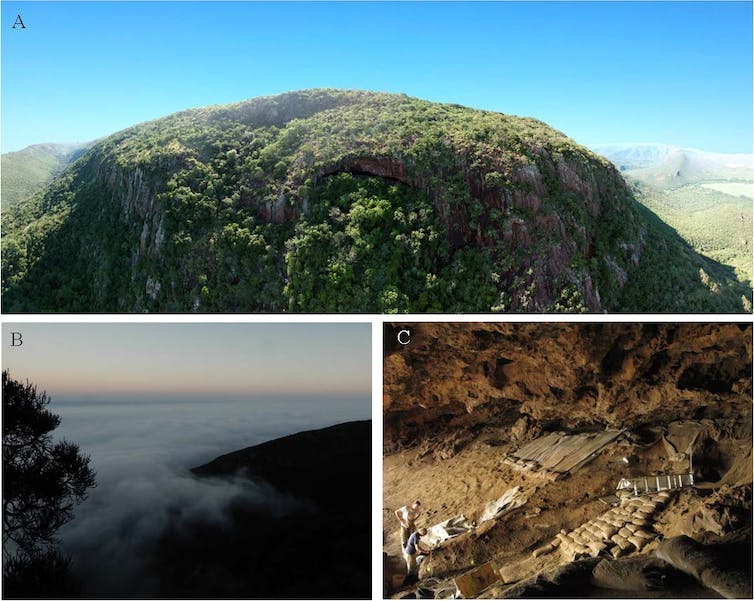 Clockwise from top: a panoramic photograph of Border Cave; the view from the cave and excavations at Border Cave. Ashley Kruger & Paloma de la Peña.

p>Some parts of the site have exceptional organic preservation: desiccated grass bedding, wood charcoal and charred rhizomes (rootstalks) from fires occur in different layers. The botanical remains we recovered in our research were preserved as ephemeral traces of silicified grass in the cave’s oldest deposits, dating back to around 200,000 years.

These siliceous remains are known as phytoliths, taken from the Greek (phyto, plant; litho, stone) – microscopic remains of silica that reproduce the cellular structure of certain plants. We discovered that Border Cave is home to the highest concentration of phytoliths documented to date in the archaeological record. This high phytolith concentration is due to their good state of preservation and an intentional and intensive accumulation of grasses for bedding construction. These phytoliths tell us about the bedding our ancestors used in the cave.

The beds we identified at Border Cave were constructed with broad-leaved grasses from the Panicoideae subfamily, and were used both for resting and to prepare daily workspaces. We know that people worked as well as slept on the grass mats because we identified debris from stone tool manufacture and red and orange ochre microfragments mixed with the grass remains that could well have been used for body decoration or on worn objects.

Using archaeobotanical, microscopic and infrared techniques, we identified sequences of burning and grass bedding indicating that people used this space repeatedly. We know the beds were periodically burned through the presence of ash, as well as burnt grass, wood and bone. Some of that burned wood came from the broad-leaved camphor bush (Tarchonanthus), a species still used as an insect repellent in parts of East Africa.

It is likely that most of these plants were infested by ticks, among other insects and pests, as is the case today. Ticks carry many diseases, and it is probable that our human ancestors would suffer from their bites. We speculate that laying grass bedding on ash was a deliberate strategy not only to create a dirt-free, insulated base for the bedding, but perhaps also to repel crawling insects.

Sometimes the ashy layer underneath the bedding was a remnant of older grass bedding that had been burned to clean the cave and destroy pests. In more recent occupations, wood ash from fireplaces was probably used as the clean surface for a new bedding layer.