People thrive all across the globe, at every temperature, altitude and landscape. How did human beings become so successful at adapting to whatever environment we wind up in? Human origins researchers like me are interested in how this quintessential human trait, adaptability, evolved.

At a site in Kenya, my colleagues and I have been working on this puzzle for decades. It’s a place where we see big changes happening in the archaeological and fossil records hundreds of thousands of years ago. But what external factors drove the emergence of behaviors that typify how our species, Homo sapiens, interacts with its surroundings?

We wanted to know if we could connect what was happening in the environment at the time to these shifts in technology and the human species that lived there. Based on our analysis, published in the journal Science Advances, we conclude that the roots of Homo sapiens‘ evolutionary adaptations stem from our ability to adjust to environmental change. 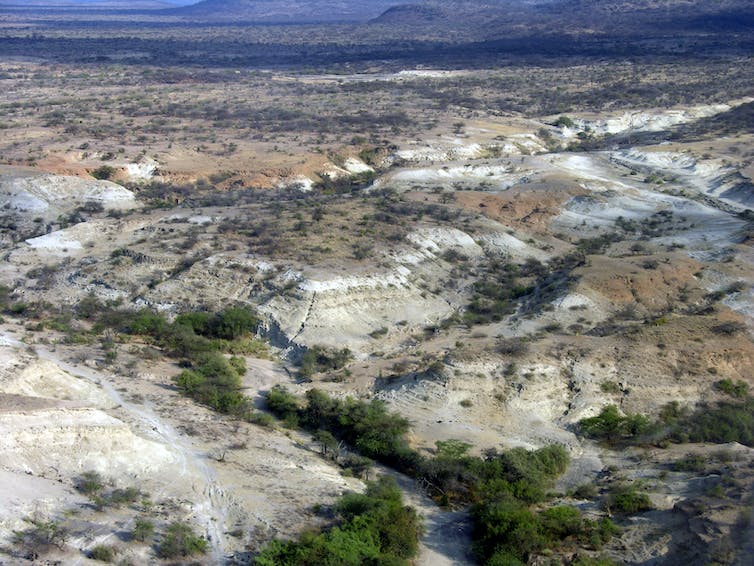 Missing time in the archaeological record 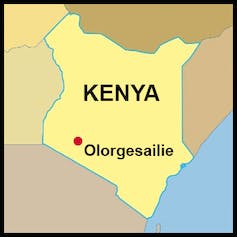 Famed prehistoric site Olorgesailie is in southern Kenya. It lies within the Rift Valley, a seismically active area where lakes and streams produced sediments that accumulated over time, burying and preserving fossilized bones and ancient stone tools.

At Olorgesailie, our scientific team has found evidence that’s potentially related to the origin of Homo sapiens in the form of a critical transition from one technology to another.

The older technology is typified by large, oval cutting implements called handaxes. Typical of what’s called Acheulean stone technology, nearly two dozen layers of these handaxes and other Acheulean tools have been unearthed at Olorgesailie. They span an immense period of about 700,000 years, covering a time when fossil remains show that the hominin species Homo erectus and Homo heidelbergensis inhabited eastern Africa.

The last Acheulean archeological sites at Olorgesailie are 500,000 years old, at which point there is a frustrating 180,000-year gap in these sediments caused by erosion. The archaeological record starts up again around 320,000 years ago, as sediments began to fill in the landscape. 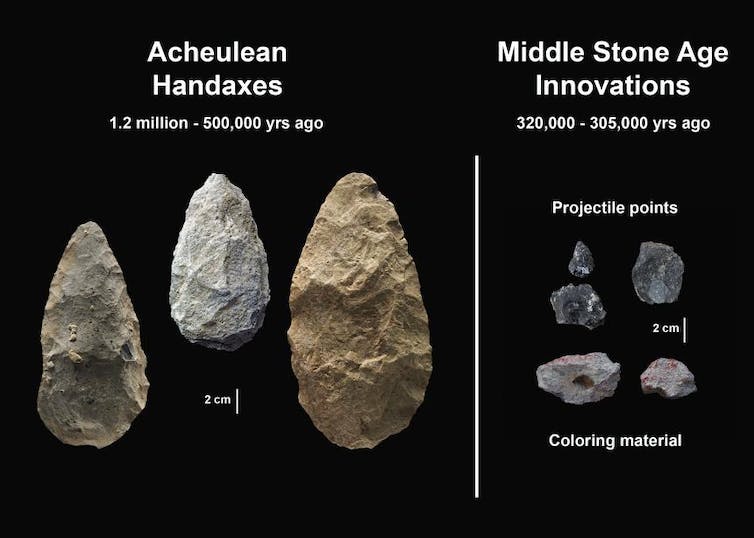 After a 180,000-year gap in the record at Olorgesailie, Achulean technologies had been replaced by those of the Middle Stone Age. Human Origins Program, Smithsonian.

These toolmakers often used sharp-edged black obsidian as a raw material. Archaeologists Alison Brooks, John Yellen and others chemically traced the obsidian to distant outcrops in several different directions, up to 95 kilometers away from Olorgesailie. They concluded that the far-off obsidian sources provide evidence of resource exchange among groups, a phenomenon unknown in Acheulean times.

Our Middle Stone Age excavations also contained black and red coloring materials. Archaeologists view pigments like these as signs of increasingly complex symbolic communication. Think of all the ways people use color – in flags, clothing and the many other ways people visually claim their identity as part of a group.

So here we had the extinction of the Acheulean way of life as well as its replacement by dramatically new behaviors including technological innovations, intergroup exchange of obsidian and the use of pigments. But we had no way to examine what happened in the 180,000-year gap when this transition took place.

We needed to recover that time. We started strategizing how we could unearth sediments from somewhere nearby that would have recorded the environments and survival challenges associated with this shift in early human adaptation.

Turning to geology for clues about early humans

Different types of sediment are laid down in lakes, streams and soils, and the sediment layers tell the story of changing environments over time. Geologists Kay Behrensmeyer and Alan Deino joined me in the field in southern Kenya to figure out where we might drill for sediments that could fill in the Olorgesailie time gap.

We surmised that the key to understanding the big transition would lie beneath a flat, grassy plain about 24 kilometers south of our Olorgesailie excavations. Together with colleagues including René Dommain and collaborators from the National Lacustrine Core Facility, we drilled in September 2012 until we reached the volcanic rock floor of the Rift Valley. 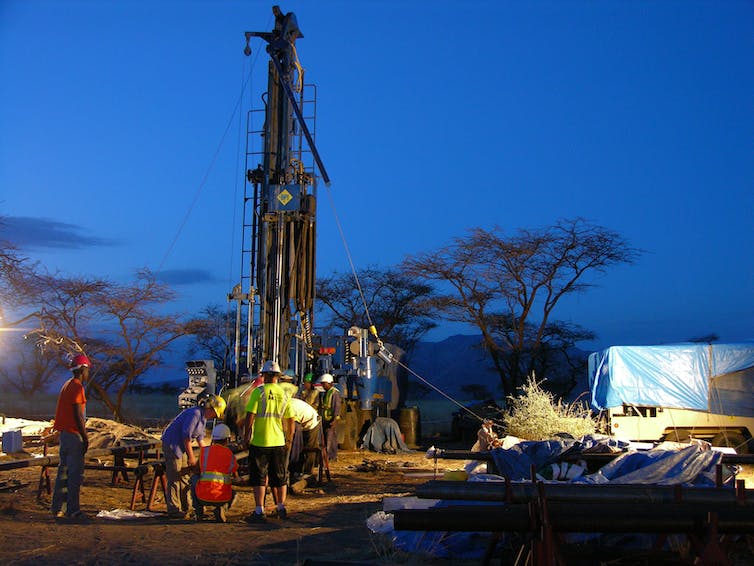 The result was a core 139 meters deep containing a sequence of ancient lake and lake margin habitats and soils, all riddled with volcanic layers we could date to yield the most precisely dated East African environmental record for the past 1 million years.

With advice from geologist Andy Cohen and other colleagues, I assembled an international team of earth scientists and paleoecologists to sample and analyze the core. We figured out ways to convert many different measures of past environment – microscopic bits of plants, single-celled diatoms from the ancient lake deposits and various chemical signals – into ecological measures of freshwater availability and vegetation cover. The newly published study provides our findings.

Environments during the time gap

The sediment record showed that during the era 1 million to 500,000 years ago, when Acheulean toolmakers were busy in the Olorgesailie basin, ecological resources were relatively stable. Fresh water was reliably available. Grazing zebra, rhinoceros, baboons, elephants and pigs altered the regional vegetation of wooded grassland to create short, nutritious grassy plains.

And then what happened in the time gap? 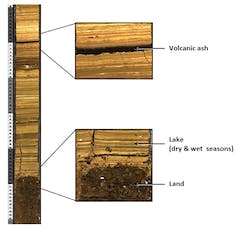 Each sediment layer visible in this cross-section of the core provides a clue about the ancient environment. LacCore, University of Minnesota.

The core is very well preserved in the previously mysterious time interval. We determined that right around 400,000 years ago, a critical environmental transition took place. From a relatively stable setting, we started to see repeated fluctuation in the vegetation, available water and other ecological resources on which our ancestors and other mammals depend.

According to the anthropological literature, hunter-gatherers today and in recent history respond to periods of uncertain resources by investing time and energy to refine their technology. They connect with distant groups to sustain networks of resource and information exchange. And they develop symbolic markers that strengthen these social connections and group identity.

Sound familiar? These behaviors resemble how the ancient Middle Stone Age lifestyle at Olorgesailie differed from the Acheulean way of life.

Equally notable, the large grazing species typical of Acheulean times became extinct after 500,000 years ago. Between 360,000 and 300,000 years ago, ecologically flexible herbivore species smaller in size, less water-dependent and reliant on both short and tall grass and tree leaves, had replaced the specialized grazers such as now-extinct species of zebras and the huge baboon.

These changes in the animal community reflect the advantage of adaptable diets, a parallel to how our Middle Stone Age ancestors adjusted to environmental uncertainty. 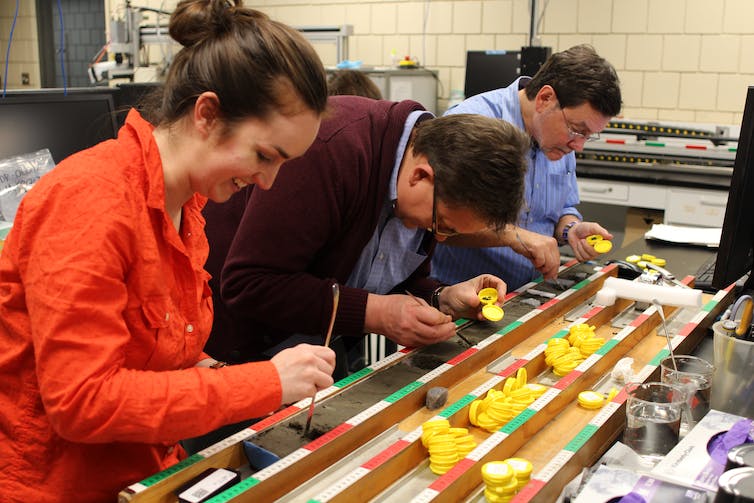 Back in the lab, scientists analyzed the contents of the core’s sediment layers. Human Origins Program, Smithsonian.

For the past two decades, many human origins researchers have thought of climate as the primary, if not sole, driver of hominin adaptive evolution. Our new study draws attention, though, to several factors in the Acheulean-Middle Stone Age transition in southern Kenya.

Yes, rainfall varied strongly after the environmental transition 400,000 years ago. But the terrain across the region also became fractured by tectonic activity and blanketed with volcanic ash. And big herbivores exerted different influences on the vegetation before and after this transition.

The result was an ecological cascade of changes that included the early humans who practiced the Middle Stone Age way of life. We propose that all of these factors together instigated this critical evolutionary change.

The Middle Stone Age might hold a lesson for today. As humanity now confronts an era of environmental uncertainty on a global scale, is our species sufficiently nimble to engage social networks, new technologies, and reliable sources of information to adjust to the environmental disruptions ahead?

A Treatise of Human Nature