A mountainside cave now used as a Tibetan Buddhist sanctuary was home to prehistoric humans known as Denisovans for tens of millennia.

Our painstaking efforts there are helping unravel the story of how early humans adapted to live in one of the world’s most remote and mountainous places.

Our research, published in Science, provides a better understanding of the little-known prehistoric humans who lived tens of thousands of years ago on the roof of the world.

In 1980, half of a fossilised jawbone was found by a monk in the Baishiya Karst Cave in China’s Gansu province, in the northeastern part of the Tibetan Plateau. The jawbone’s long-deceased owner was dubbed “Xiahe Man”. 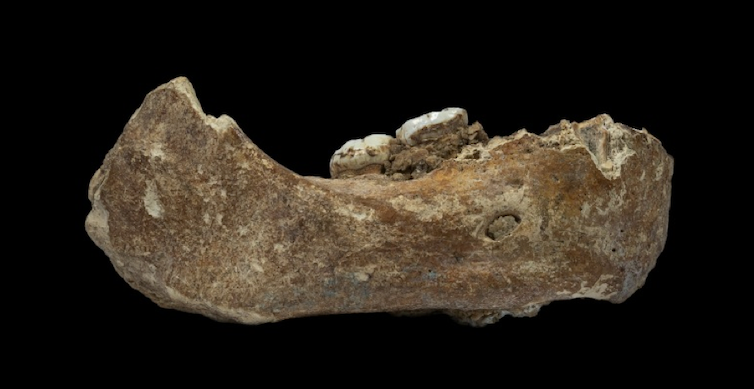 This jawbone fragment represents the only known remains of the mysterious Xiahe Man. Author provided.

Analysis showed the mandible was actually the 160,000-year-old remains of a Denisovan. This group of mysterious prehistoric humans was originally discovered in the Denisova Cave in Siberia, Russia.

So this fossil was not only the earliest evidence of human occupation on the Tibetan Plateau, but also the first Denisovan fossil to be found outside of Denisova Cave — and the largest to ever be found.

However, without other archaeological evidence to put the solitary jawbone in context, this single fossil gave us little convincing evidence to piece together the full story of the mysterious Denisovans living on the roof of the world.

For this, we needed to properly excavate the Baishiya Karst Cave and see what we could find. After dozens of visits to the cave and others nearby, in 2016 we finally found the first indisputable stone artefacts (probably made by Denisovans) on the cave floor.

With this, we became further convinced the cave was a treasure trove of archaeological deposits that could help tell the story of the Denisovans. But, as it’s also a Buddhist holy cave, we weren’t allowed to dig inside it — not even one scrape of a trowel.

Midnight digging in the depths of winter

After two years of wrangling with authorities and extended negotiations with the temple’s Buddhist caretakers, we finally got permission to excavate a limited area within the cave. This was on the condition we worked late at night during the cold of winter, when no monks or tourists were visiting.

So every night, for three weeks, we inched our way across a frozen river, trudged up the mountainside through prickly branches and thick snow to reach the cave 3,280 metres above sea level. We slept during the day and excavated at night.

Despite the bone-chilling wind and darkness punctuated only by weak lamplight, it was exciting work. And our efforts were rewarded.

The archaeological remains we uncovered were richer and even more beautiful than we’d expected, including stone artefacts and animal bones buried throughout the sediments.

In 2019, a fresh permit allowed us to work during the day, too, albeit still in December (the coldest month of the Tibetan winter). We found yet more archaeological riches, including stone artefacts, animal bones and the remains of fires — crucial evidence of people living in the cave. 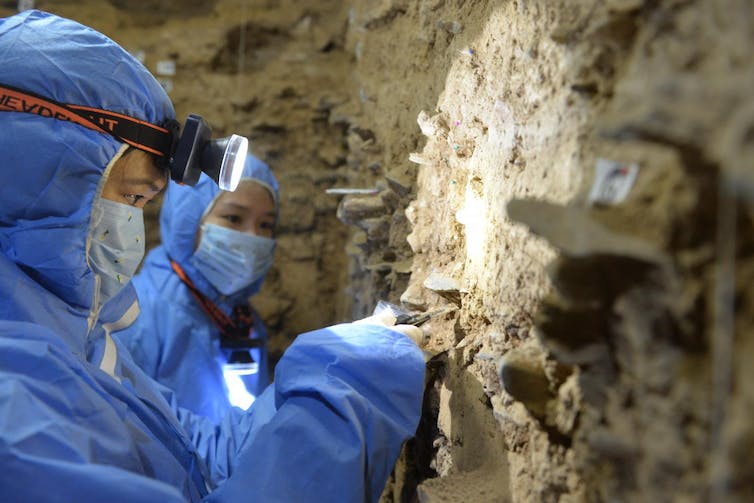 Our discoveries have raised several questions. Who lived in the cave and made these artefacts, and when? Were they Denisovans like the original Xiahe Man from 160,000 years ago, or modern humans? Or perhaps a genetic combination of both?

The “when” question was tackled using two techniques. By radiocarbon-dating the animal bones, we worked out when they were brought into the cave — either as food for human occupants, or simply animals sheltering alongside humans.

Our dating techniques, similar to those used previously at Denisova Cave, revealed the oldest stone artefacts in the Baishiya Karst Cave were buried more than 190,000 years ago. Since then, sediments and stone artefacts accumulated over time until at least 45,000 years ago, or perhaps more recently still.

But who were the people who lived there? To answer that question without any fresh human fossils besides the original jawbone, we needed to examine human DNA in the sediment samples.

We focused on identifying sequences of “mitochondrial DNA”, as cells contain many more copies of this than they do nuclear DNA. Thus, mitochondrial DNA is easier to obtain and analyse for research.

We found mitochondrial DNA matching Denisovans in cave sediments between 100,000–60,000 years old. What’s more, we found the newer samples were more closely related to those from Denisova Cave than older ones, indicating Denisovans were indeed more widespread than originally thought.

It’s possible they could have even contributed significantly to modern human DNA. For example, they may have helped today’s Tibetan Plateau dwellers on their evolutionary journey of adapting to high-altitude mountain life.

To confirm this, we’ll need to find out how long the Denisovans lived in the region around the Baishiya Karst Cave, and crucially, whether they survived long enough to intermingle with the modern humans who arrived on the Tibetan Plateau between 40,000–30,000 years ago.

Although, even if Denisovans and modern humans did come face to face, they would have actually had to interbreed for Denisovans to be able to share their high-altitude evolutionary adaptations.

It’s difficult to know whether this happened by only analysing mitochondrial DNA, since this only carries information about the maternal lineage.

This means it doesn’t always reflect the complete population history of a specimen. Future attempts to extract nuclear DNA from the Baishiya Karst Cave may finally provide the tools needed to explore these questions.