Unlike the wildly popular Netflix chess-themed series The Queen’s Gambit, female players have struggled to climb to the top of the real-life chess world. Just 37 of the more than 1,600 international chess grandmasters are women. The current top-rated female, Hou Yifan, is ranked 89th in the world, while the reigning women’s world champion Ju Wenjun is 404th.

Why? There are certainly fewer female chess players to begin with, but it appears unlikely participation can explain the whole story.

The argument about chess’s gender gap often follows the classic nature-versus-nurture debate. On one side are those who believe men are “hardwired” to play chess, such as former World Championship challenger Nigel Short.

His comments caused a media storm in the United Kingdom. It’s true women have been shown to exhibit higher risk aversion and lower competitiveness across many domains, including chess, possibly driven by differences in testosterone. However, evidence is mixed on whether or how these traits affect performance over the chess board.

‘We are capable of the same fight as any man’

On the other side are those who argue the gender gap in chess is mainly due to societal and cultural pressures that put women off the game. A commonly cited example is Hungary’s Judit Polgár, considered the strongest female player of all time, and the only woman ever to be ranked in the world’s top ten. Her psychologist father believed geniuses are created, not born. His three daughters, home-schooled in chess from the age of three, each achieved groundbreaking success in the game.

Judit Polgár reached a peak ranking of eighth in the world and shared the same view as her father when she retired in 2015, saying:

We are capable of the same fight as any man. It’s not a matter of gender, it’s a matter of being smart.

When men lose against me, they always have a headache… I have never beaten a healthy man.

The American Bobby Fischer, on whom The Queen’s Gambit’s lead character is largely based, once said women are “terrible chess players”, later opining that “I don’t think they should mess into intellectual affairs; they should keep strictly to the home”.

Another former world champion, Garry Kasparov, said in a 1989 issue of Playboy Magazine that “there is real chess and women’s chess”.

These sorts of beliefs may induce a “stereotype threat” that can explain part of the performance gap.

Stereotype threat is where minorities underperform solely because they’re aware of a stereotype that people of their group do worse. Confidence flags, interest wanes and a vicious cycle of self-fulfilling prophesy follows. The stereotype threat effect has been observed in experiments involving women and mathematics performance and in studies on lower representation of women in leadership positions.

In one study, researchers pitted male and female chess players against each other online. The sexes performed equally when identities were anonymous, but when the sex of the opponents was known, female players performed worse against male players and better against other female players.

Using a dataset of more than 180,000 players and 8 million rated tournament games, my colleagues and I recently found evidence to support a stereotype threat effect for female chess players. Female players tend to perform worse against male opponents than against female opponents, even after accounting for chess strength.

The performance drop is roughly equivalent to a woman giving her male opponent the advantage of the first move in every single game. 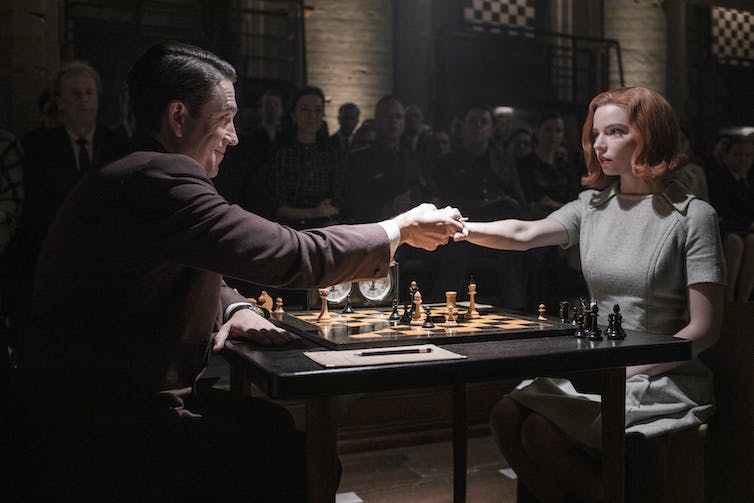 Research suggests female players tend to perform worse against male opponents than against female opponents, even after accounting for chess strength. PHIL BRAY/NETFLIX.

The winds of change

There is still much to discover about what play the biggest roles in driving the gender performance and participation gaps in chess, what policies can be used to narrow them, and what these insights tell us about other male-dominated fields.

What we do know, however, is the chess world is starting to change. In 2001, only 6% of internationally rated players were female. By 2020 this had risen to more than 15%.

Part of this may be due to “affirmative action” policies, such as chess league mandates that clubs include at least one female player in their (typically eight-player) teams. This not only increases female earnings but also has a trickle-down effect for female participation.

Two economists recently looked at the effect of this policy in the French chess league. The study, which is yet to undergo peer review, found not only that the share of female chess players in France significantly increased in subsequent years, but that the ratings gap for elite male and female players also narrowed.

Attitudes are starting to change, too. After his famous loss to Judit Polgár in 2002 — the first time a female player had beaten a reigning world champion in a rated game — Kasparov was asked about his past opinions about women’s chess. His reply: “I don’t believe that now.”

Chess societies have not been very kind to women and girls over the years. Certainly, there needs to be a bit of a change in culture.

Could The Queen’s Gambit spark that change? The show is Neflix’s most-watched scripted limited series, reaching number 1 in more than 60 countries.

Chess-related Google searches have soared since its debut. And past research has shown popular television can have a significant impact on real-world outcomes related to gender.

As to whether we’ll see a “Netflix Effect” on the chess gender gap, only time will tell.

The Blank Slate: The Modern Denial of Human Nature

The Epistemic Innocence of Irrational Beliefs

Psychology is the science of mind and behaviour, and as such has enormous scope. It's all relevant to human nature, but we try to limit our focus to those studies that tell us something about our morality, beliefs, and consciousness. Until recently these areas were considered by many to be outside the scientific realm altogether.

When balancing altruism and selfishness, it's me first

Conspiracy theories affect your behaviour, whether or not you believe them

Smile, though you're dying inside

The morality of feeling equal empathy for strangers and family alike

What’s behind the gender imbalance in top-level chess?

How we think about cause and effect

Sign up for our weekly newsletter
Search
Or browse topics or the archive.
News
Psychology
Books

The Blank Slate: The Modern Denial of Human Nature